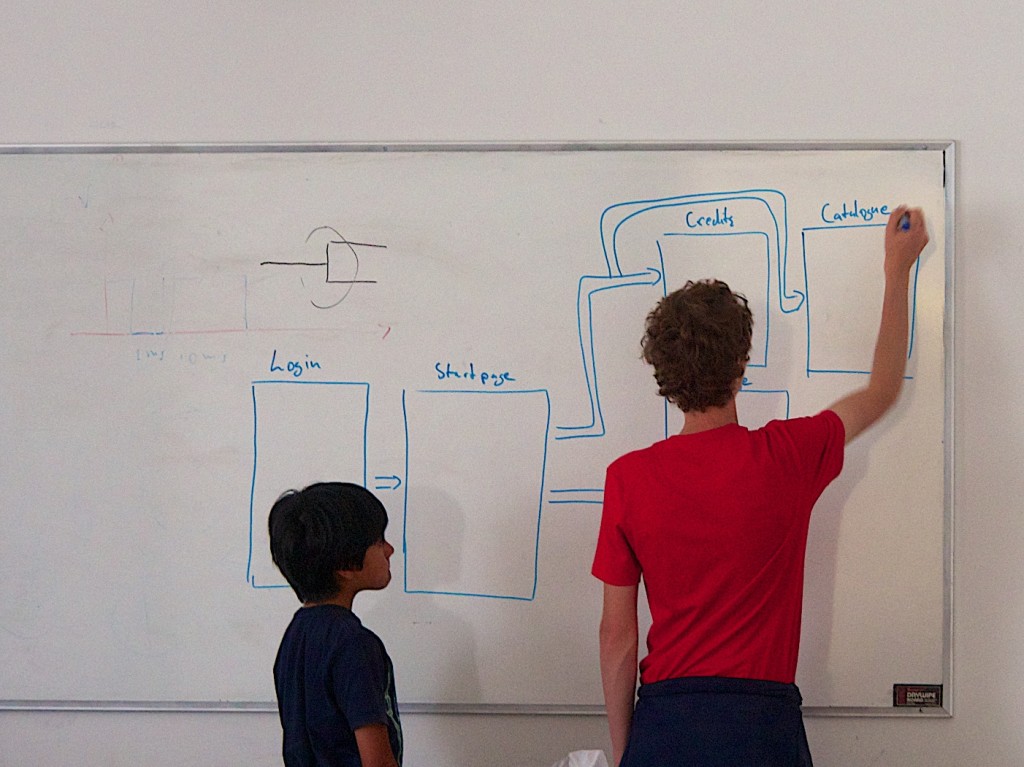 Kiran and Tom, planning away.

Way back in August, cities all over the UK played host to Young Rewired State Festival of Code, the national hackathon for under 19s. Edinburgh was no exception, and every day for a week around 16 young people — mostly regulars from the Prewired coding club took up residence in the University of Edinburgh’s Appleton Tower to team up and work on open data related projects. They were supported by enthusiastic volunteers from local universities and tech companies.

Exciting and inspiring work came out of the event, including a handy reverse-weather-lookup (to choose your destination based on the weather you want); SMS enhancements to Minecraft; a Scratch game sent in Ancient Greece; a space game that used real NASA asteroids data; and a location-aware canvas that creates art based on a GPS trace of your perambulations.

The YRS finale took place in Plymouth over the weekend. The distance meant that not all of Scotland’s YRSers were able to attend, and for those who couldn’t we arranged an alternative mini-finale in Dundee.

Edinburgh did manage to send three teams to Plymouth however, where they joined over 600 other young people to attend talks, party to chiptune, eat pizza and code all night long. They also presented their projects in three heats to be judged by professionals from all corners of the software development industry. Two of our teams got through to the semi-finals.

Here’s an account of the experience by Tom, one of the Prewired regulars:

Why YRS is not a competition

I disagree with classifying a person’s ability based on one task, given one chance. It fails to recognize the crowd or those who do not perform well under pressure. This is true in sport as well as any other form of competition. Just ask Andy Murray or Sir Chris Hoy — they both will tell you that the hardest thing was the struggle with their own emotions. And that is why YRS is special: it does not focus on winning.

When I first heard about the event I thought to myself ‘Why not?’. I had never been to a coding competition before, let alone one of the scale of YRS Festival of Code (FoC). Certainly the week of code was fun and exciting. Everyone around me was doing something that was either cool, exiting or simply freaky. However that was nothing compared to the buzz that I experienced at the main event in Plymouth.

Never before have I seen everyone in a single building sharing the same common passion. The mood was unique. Every available seat, couch or stool was occupied by laptops, equipment and people, some rattling away on the keyboard, others staring intensely at each other’s screen, concentration carved into their faces. Around the corner: more people chatting, laughing, sharing. There was no time or real place to sleep. The motto: We will go on! (You should have seen them all at breakfast time.)

YRS FoC is a think tank, not a competition. Skilled or unskilled, everyone is given the chance to create something. YRS provides the right environment and the right resources (thumbs up for that @YRS) and once the toddlers have settled in there is nothing from stopping them having a go at changing the world. And so they did! Some of this year’s projects were just unbelievable. From the Germans whose tech skills left everyone with their mouths ajar, to the team behind Tourify, revolutionizing city tours. But what I found most inspiring about YRS were all the small projects, the many ideas and people who with little skill had created something that did not only work but that you would want to use.

That’s YRS for you. The most inspirational competition I know of because anyone can change the world a tiny bit. No skills required!

On the 3rd of August, a group from Prewired who had participated in the YRS week traveled up to Dundee to take part in a weekend wrap-up for the Festival of Code. This gave the groups from Aberdeen, Dundee and Edinburgh a chance to socialise, share ideas, discuss the week’s activity and present their work. Groups from Aberdeen and Prewired won prizes for their projects. It was nice to be able to put forward and exchange ideas with a new group of people as well as getting some new opinions and advice about how to improve the project we had been working on.

This was an amazing day out and a great opportunity to mix with other young people who shared a passion for coding. 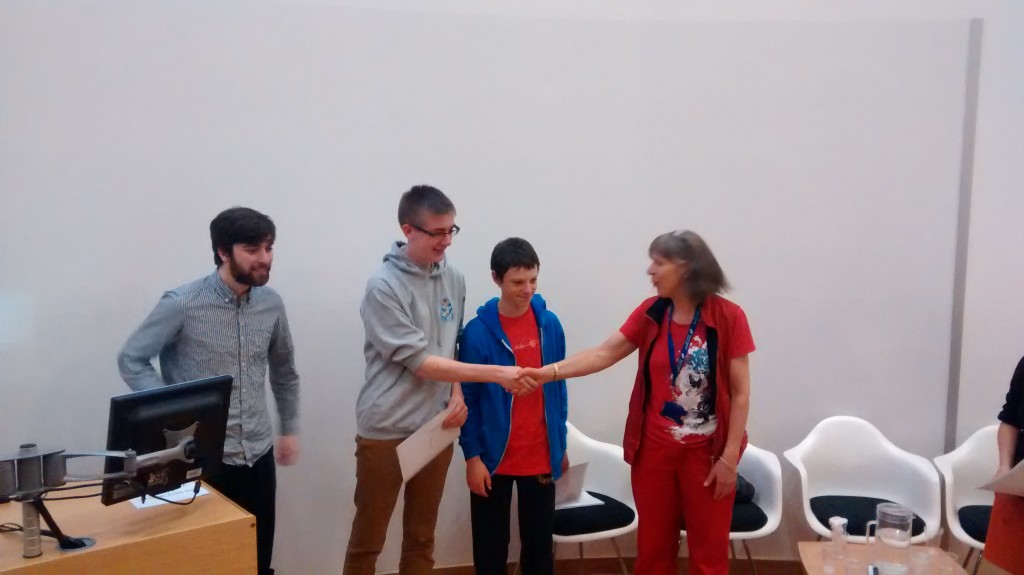 Connor and Lachlan receiving a prize in Dundee for their addition of SMS to Minecraft.

Prewired will be sending a team to the YRS Festival of Code again next year (which hopefully won’t be as far away as Plymouth); and it’s not too early to register on the YRS site if you’re interested in taking part as a participant or a mentor!