Looking back over the last year, OKF Scotland has really started to flourish. The Edinburgh meetups have brought together an impressive variety of people from many groups and institutions, and new connections keep on appearing. Even better, they are a huge amount of fun! 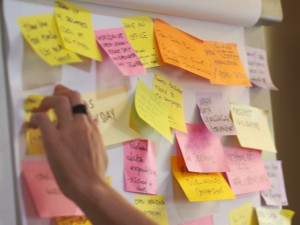 The recent inaugural OKF meetup in Glasgow was an opportunity to make yet more connections, and revealed a level of interest and enthusiasm that I hadn’t anticipated. While both the Edinburgh and Glasgow groups will continue to grow, there is also a huge potential for both groups to support and stimulate the other.

So we have made a good start at building vibrant communities around open knowledge in Edinburgh and Glasgow. What next? Although it would be nice to kick off similar community connections in other cities, that probably isn’t the main priority right now. Instead, it seems time to focus our shared expertise and enthusiasm in a developing few local projects that will make a difference in Scotland.

At the #OpenDataEDB in Edinburgh’s Cellar Monkey on 24th July, a group of us used Post-it Note brainstorming to generate ideas for projects that we thought would be fun and worthwhile. In order to take this further, I decided to follow the example of our friends in ScotGovCamp, and pushed a small selection of the ideas into an OKF Scotland community on IdeaScale. Here’s what the project ideas page looks like at the time of writing: 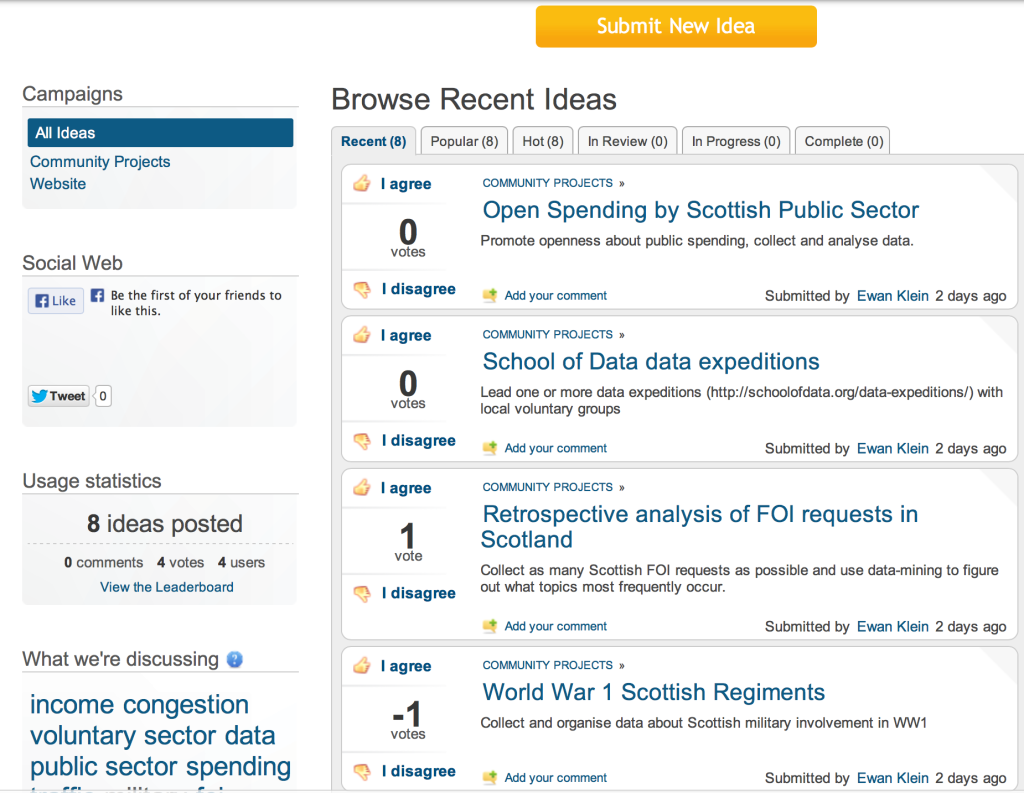 Screenshot of OKF Scotland on IdeaScale

Once you’ve registered on the site, you can propose new ideas and vote on existing ideas. If one of the ideas that I’ve already submitted was originally due to you, let me know and I’ll give you credit. And here is the address of the page: http://okfnscot.ideascale.com. Get stuck in! I am hoping that around 2 or 3 project ideas will bubble to the top of the list, and we can then form groups that will work to make them happen.

Finally, it’s important to note that our work in the Scotland Local Group can benefit from the framework provided by the wider Open Knowledge Foundation community, and indeed many of the themes that have emerged as discussion topics in our meetups resonate with the Working Groups that have been established at an international level by OKF, such as Open Government Data, OpenGLAM (Galleries, Libraries, Archives and Museums), Open Science and Open Education. As we start to establish more structure locally, we should be able to make productive links with the Working Groups.

Let me end with a great quote from Berkana Institute’s Theory of Change (via David Flanders):

… widespread impact does become possible when people working at the local level are able to learn from one another, practice together and share learning with communities everywhere. We have observed that large-scale change emerges when local actions get connected globally while preserving their deeply local culture, flavor and form. And we have called this trans-local learning.