I was delighted to be able to make it along to the OKFN meetup on Tuesday 5th March 2013, which was held at the Apex Cafe, Edinburgh Napier University. There was a huge turn out — probably 40+ people — so it felt really busy and there were lots of great chats and networking in the breaks.  Ewan asked me to blog the event based on my notes of the talks, so here is my account of what happened. 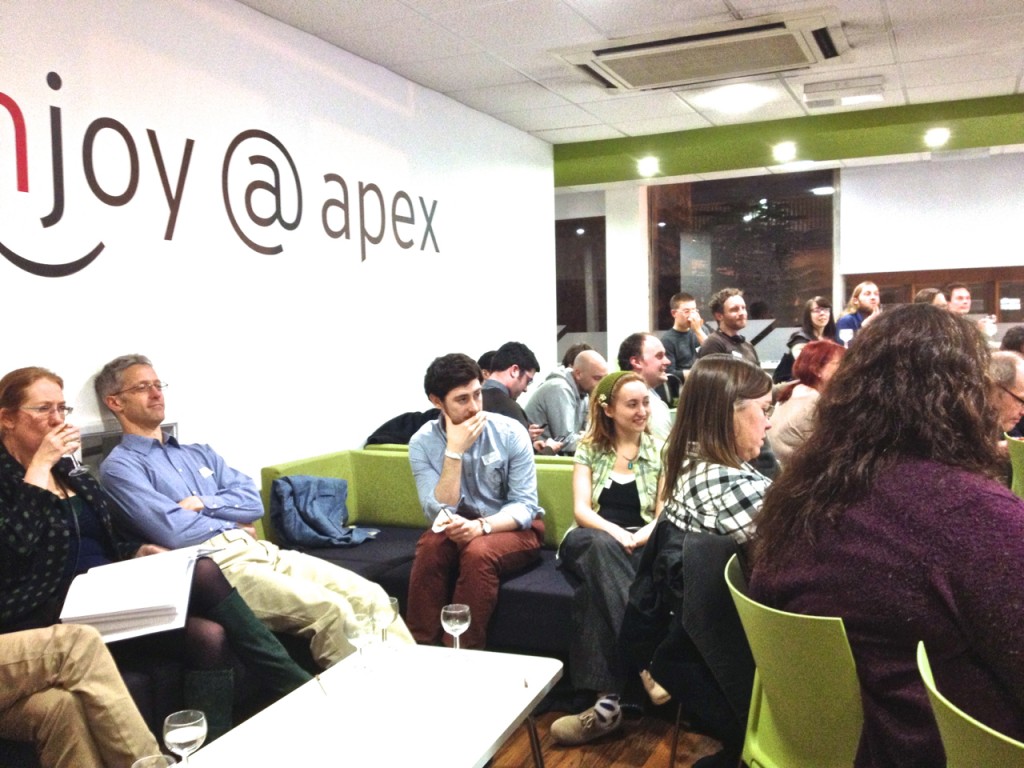 The evening opened with a welcome from Hazel Hall (Centre for Social Informatics, Edinburgh Napier University). She added that she was co-hosting with Peter Cruikshank but that he wasn’t there as he had just had a new baby — congratulations all round!

Leah Lockhart (Improvement Service): Digital engagement for the third sector. Leah is involved in a new series of Edinburgh social media surgeries. In these monthly events, ‘surgeons’ provide advice to community groups and those in the third sector, covering such topics as how to develop a social media strategy, how to integrate social media with websites, and so on. Leah proposed applying this model to open data, to enable newcomers to learn more about the benefits, risks, tools and methods of using and publishing open data.

Kate Byrne (School of Informatics, University of Edinburgh): Google Ancient Places project. Kate described the Google Ancient Places (GAP) project, funded by the Google Research Programme. The project makes use of GapVis, a visualisation tool that helps people to explore classical literature. Google Books’ classical texts are processed using the Edinburgh Geoparser, then the Pleiades gazetteer of ancient places. A lovely interface enables three views: a book summary view that allows exploration of the text as a whole; a reading view that focuses on a single point in the narrative and enhances the text; and a place detail view which allows the reader to explore the texts via a specific geographic location. You can see an example page from a text or you can access a full (beta)version of GapVis.

Kate finished with a quick plug for EDINA (for full disclosure, this is where I work). They have mounted the Edinburgh Geoparser as Unlock Text. Although the documentation doesn’t specifically mention the ancient gazeteer (yet), there is some documentation on Unlock Text on the GAP blog here and here.

Eilidh MacGlone: Publishing film metadata for the Scottish Screen Archive. Eilidh, curator of the Scottish Screen Archive which is based at the National Library of Scotland described how the Archive has really just started dipping its toes into open data. All of the Archive’s records about films are on the website and all metadata for the films has been shared as part of Europeana. Next they are looking to turn biographies of Scottish film-makers of note as open linked data. So, Margaret Tait, for instance, has a Virtual International Authority File (VIAF), which is like a library authority file. In addition to being a filmmaker, she was also a poet so there is additional material to enrich knowledge of her and her work.

Claire Turnbull (Scottish Parliament): Open data and the Scottish Parliament. As Head of Information Governance, Claire is part of a team examining implications of working in a more digital environment that crosses departmental structures, particularly focussing on the new Public Records Act and management of the Public Records archive. Other areas of responsibility include FOI requests; Data Protection, environment protection, copyright and open data.

Open data is a new departure for the Parliament, though some material and images have already been released under a new Scottish Parliament Open License. A working group is currently developing plans and criteria for a pilot initiative to publish as open data more of the information that is already available on the Parliament’s website.

Ally Tibbitt (Greener Leith): Local Edge. Ally started by discussing the availability of planning data. The City of Edinburgh Council’s planning site publishes new requests and the associated plans, but doesn’t make the data available in a format that is easy to reuse. To remedy this, a ScraperWiki was set up several years ago to convert this data, and despite several changes in the website structure, there is currently a working scraper driving both a map and a Twitter account which has built up a good number of followers. He pointed out that “we have moved from a place where putting community council information on the web was regarded as witchcraft, to a point where more than half of folk use location-aware mobile devices”. The new TellMeScotland site is another source of planning data, but for most potential users, the SPARQL endpoint is not a realistic method of querying this data. Ally gave huge kudos to Amy Guy who was, at that moment, halfway through hacking the TellMeScotland data with SPARQL queries and OpenstreetMap to create a GeoRSS feed to push to apps.

Ally is hopeful that the forthcoming Greener Leith/Broughton Spurtle app will be working soon. The software, which is funded by NESTA , is intended to be a model for other neighbourhood apps and to act as a platform for supporting hyperlocal community activity.

Tina McLelland (Improvement Service): Developing a proof of concept for TellMeScotland and making it real. Next up, appropriately enough, was Tina to talk about TellMeScotland.gov.uk. Tina described the site as a tank (indeed she had a toy one along to make the point) pushing through barriers to making data available. Tina gave a special thank you to Amy for the hacking work she was undertaking. Tina said that they have put data “out there” but with no idea of what people may want to do with that data. The site includes a combination of planning, Natural Scotland consultations, flood warnings etc. but it’s proof of concept and the site can be wobbly, particularly as so much data is being added by so many organisations. The site has funding from Scottish Government. She said that they are very keen to see planning improved by making this data available. And it’s not TellMeScotland’s data but council departments that are loading their own data. Real people are pushing for this site. But the merit of these things doesn’t become apparent until you start playing/break it/drive a tank through it!

Peter Winstanley (Scottish Government): Linking triplestores with XML databases. Peter gave a technical talk which addressed the question of how to convert XML data into RDF, or more specifically, how to link up an XML database with an RDF triplestore using HTTP. Rather than trying to summarise Peter’s approach here, I suggest you have a look at his slides. 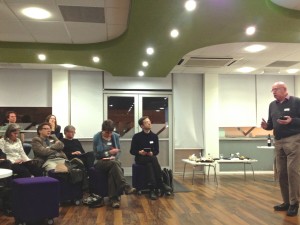 Robert said he “wanted to do a plug for the UK Government data services”, which contain a large amount of socially important and readily available information. For example, the Economic and Social Data Service (ESDS) publishes the Labour Force Survey on a quarterly basis and also the General Lifestyle Survey (formerly the General Household Survey), tracking the lives of over 12,000 participants; this is a very rich source of information for exploring issues related to inequality. Pretty much any academic or government institution can access the ESDS data archive for research. Robert illustrated this with plots of historical data on the “wage scarring” effect of beginning a career with a period of unemployment.

In Scotland, the Scottish Household Survey, a biannual survey of 10,000 households / 30,000 individuals and Scottish Neighbourhood Statistics (SNS) are both important and robust data sources, though the latter is in need of update. The SNS data include house prices over time, allowing us to see how rises in Aberdeen property prices mirror the growth in oil revenues.

Ewan briefly reported on the Smart Data Hack which took place from 18th–22nd February at the School of Informatics as part of Innovative Learning Week 2013.
The week-long event saw around 80 students working in teams on a variety of datasets, including some that had only just been published in a machine-readable form by the City of Edinburgh Council. This was a great way to get students grappling with real data and also becoming more aware of the benefits of open data.

Ewan also announced that he was proud to be one of the new OKFN Ambassadors, and that this would be the start of an official OKFN Local Group for Scotland.