Last week (24th to 28th of November 2014) I attended the the 19th International Conference on Knowledge Engineering and Knowledge Management (EKAW2014). Set in Linköping, a charming (and chilly) city in Sweden, the conference had a strong focus on Semantic Web related areas, such as Description Logics, OWL and Linked Data.

For tweets about the conference: #EKAW2014

One of the highlights of the conference was the great line-up of invited talks. Highly relevant to the Open Knowledge community was the talk by Oscar Corcho, who presented his recent experience with Smart Cities in Spain. The goals of this project included evaluating the maturity of Open Data initiatives and improving their interoperability. This talk included many interesting (and intentionally provocative) reflections on the current state of the Semantic Web research area. The overall picture was of a very diverse field, populated by different kinds of researchers (five archetypes, according to Oscar’s presentation) and following different and possibly inconsistent principles. This diversity is on the one hand a richness, but on the other a source of confusion which results in sending mixed signals to other communities. Examples of such sources of disagreement are lightweight Vs heavyweight ontologies, reuse Vs non-reuse of ontologies and the choice of schema.org Vs Linked Data Vs Description Logics. For an overview of his talk, you can find the slides here. And if you are interested in the distribution of the “types” of Semantic Web researchers, the results can be seen here. 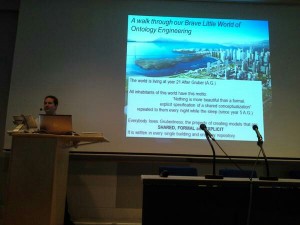 In the light of all the differences that exist in the Semantic Web community, what is the best way forward? A proposal comes from the the talk by Pascal Hitzler on ontology design patterns. Seen as a compromise between Description Logics ontologies and Linked Data, a design pattern should be “a reusable successful solution to a recurrent modeling problem”. This definition suggests a plug-and-play approach to ontology design, where the reusable part is neither the whole ontology nor the single URI, but instead a self-contained ontological pattern. The slides for this talk are available here.

As an example of the diversity in the EKAW conference, a philosophical perspective on knowledge representation came from Arianna Betti. Her talk focused on the problem of tracking ideas as they evolve over time. One application of this work is to leverage the vast amount of existing research which cannot be extensively analysed manually by defining a formal model of science. The evolution of ideas in time is characterized by the change in the marginal and core aspects of an idea.

During the first day of the conference I attended the International Workshop on Visualizations and User Interfaces for Knowledge Engineering and Linked Data Analytics (VISUAL2014). This workshop featured some impressive visualization tools, most of which focused on Description Logics ontologies, but also some targeting Linked Data. The workshop included a visual tool for choosing the most appropriate ontology to model a domain, and even a system to choose the best ontology visualization tool for one’s needs.

On the second day I attended a very interesting tutorial on Language Resources and Linked Data. This event focused on the applications of OWL and Linked Data in modelling multimedia language resources (the lemon model) and Natural Language Processing resources (the NIF format). We also looked at BabelNet, a large multilingual encyclopaedic dictionary, and Babelfy a multilingual word sense disambiguation tool built on top of it. Overall, it seems like Linked Data can make a difference in easing the integration of resources in different languages, or processed by different NLP tools. However some questions remain on the efficiency of having a verbose OWL/RDF representation when processing a large amount of language resources.

To attend the Language Resources and Linked Data tutorial I missed the Doctoral Consoritium. Which is a pity, as the attendees said it was very interesting for junior and senior researchers alike. The invited speaker, Mathieu d’Aquin, gave a speech (and ukulele performance) on doing research on semantic technologies. Those who (like me) missed his talk, can find the slides online. 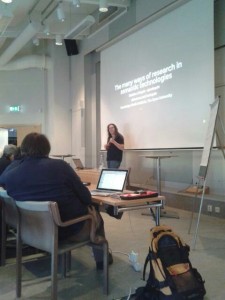 During the last three days we had the presentations of the main conference. These were divided in several topics, which included Linked Data, Knowledge Extraction, Knowledge Integration, Reasoning, Semantics, Usage and Visualization of Ontologies and Applications and Methods for Knowledge Engineering. The complete list of the presentations can be found in the conference program. On the last day I presented my work on representing human know-how as Linked Data and tried my luck in giving a Pecha Kucha style presentation for the first time.

EKAW 2014 was not short on social events. The official events included an ice-hokey game and an awe inspiring interactive visualization of the universe in Norrköping. The spontaneous socializing led us to many interesting places, including local food, local music and dancing around a Christmas tree. 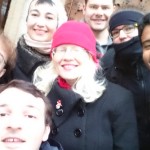 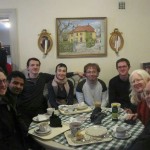 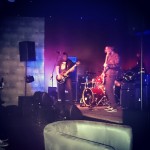 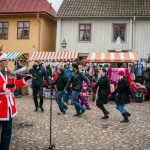 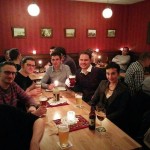 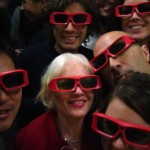 When the weekend arrived, for most of us it was time to go home. Given the small amount of flights leaving Linköping, it is no surprise that so many of us boarded the same flight. We even took an airport-group-picture to prove it. 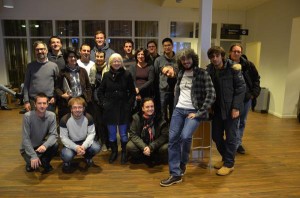