Our September OpenDataEDB meetup was kindly hosted by the Scottish Council for Voluntary Organisations (SCVO) at their offices in Lauriston Street. We are also grateful to 1partCarbon for generously sponsoring refreshments for the meet-up.

First off, we heard from James Stewart about a new collaboration between several departments in the University of Edinburgh and the City of Edinburgh Council called Edinburgh Living Lab. Modelled after MIT’s Living Lab work, Edinburgh Living Lab wants to explore how innovation happens in technology, how technology projects can make better use of user feedback, how data can inform design, the social learning process and how to bridge the gap between the creator of new technologies and the users of that technology. It also wants to create an infrastructure that will allow everyone to have access to early testing, to get ideas from communities and create links with industry. There is a well-established and thriving network of living labs in Europe and elsewhere, but Edinburgh is just starting out. Edinburgh Living Lab will begin by bringing the City of Edinburgh Council together with Masters students from the University’s Design for Informatics course to find issues and problems in local communities that need solving. It can be difficult to engage citizens to take part in projects like this so the living lab will be initially working with Inverleith Neighbourhood Partnership to work on promoting active travel in the community using the co-production and data-led methods of a living lab.

Update from National Libraries of Scotland 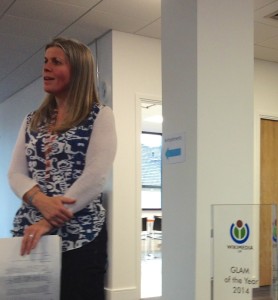 We last heard from NLS at our January meetup when conversations and ideas were being considered around licensing metadata and digitised material and generally how the library would approach being more open. Gill Hamilton and Fred Saunderson had good news that over the next year, the library is beginning to make collection metadata open under CC0 (‘no rights reserved’). With the help of Ally Crockford, the NLS Wikimedian in Residence, around 1,000 images of the construction of the Forth Rail Bridge and of the collapse of the Tay Rail Bridge have been recently published. The impact of this work was recognised by the NLS receiving the Wikimedia GLAM of the Year 2014 award.

News from City of Edinburgh Council

Nev Stokes, web developer with the Council, told us their CKAN-powered alpha data store is now available and already has over 50 data sets in it. The data sets are mainly a reflection of what was in the Council’s GitHub data sets. The GitHub repository will probably be kept as a location for initial data release, whereas more polished sets will sit on the new data portal.

Core Open Knowledge Scotland member Amy has had an incredible summer at the BBC working as a Data Architect in their Linked Data Platform team. The team is made up of 5-6 developers, a Business Analyst and one other Data Architect.

BBC’s Linked Data Platform has evolved from their Dynamic Semantic Publishing platform which had been developed for the 2010 World Cup to automatically publish web pages based on metadata. Now, the Linked Data Platform allows the storing and querying of linked data over a wide variety of subjects. The Linked Data team’s clients are internal to the BBC and each client is interested in different, but often overlapping, types of data. The BBC has many of its own ontologies, including terms from external ontologies re-defined according to their needs. The Linked Data Platform team builds APIs for their clients’ needs, for example to power websites, and is helping journalists to organise their content by encouraging them to tag stories with tags from their triplestore and creating systems to help journalists maintain the tagging data. Amy and the team have been working with lots of legacy data, migrating it to new models and getting it ready to make available online.