The evening featured the usual eclectic showcase of interesting open data projects, and livestream recordings of the meet-up are available here:

The first talk of the night was given by a team from National Records of Scotland (NRS) who presented an outline of recent work on the 2011 Scottish Census, the data for which is available under an Open Government License.

Early analysis has revealed some interesting trends. The population of Scotland in the Census was 5.3 million, the highest recorded. This population is ageing, and is more ethnically diverse than ever before. The data reveals a significant rise in one-person households, which are now the most common household type due to increases in the numbers of both young and old people living alone. A new Census question focused for the first time on national identity, might have some relevance in light of September’s referendum.

The team gave a demo of the online Census Data Explorer, a useful tool for exploring the data. The NRS are very interested to hear how people might use their data. There is the possibility of an API being developed in the future, though no timescale was given.

Sally Kerr, Digital Services Manager at Edinburgh Council, gave an update on the council’s Open Data Roadmap. The Council have been working on the roadmap for some time, and are currently in the process of engaging with various Council departments in order to build relationships and convince them of the benefits of releasing their data.

The Council are also engaged in a process of determining what their data assets are, i.e. data they might be able to release. The aim is to release this data on a ‘public information hub’ where users will be able to access and play with data.

The coming year will also see a number of data-related events take place at the Council, including hackathons and data days for staff as part of its engagement process. 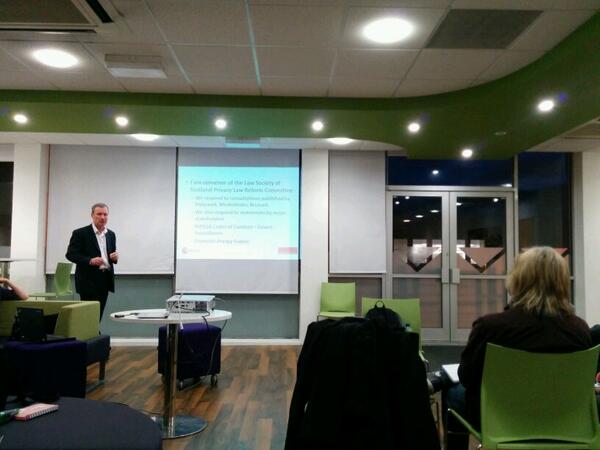 Tim Musson gave an outline of the work of his company Computer Law Training on issues relating to open data. Tim was previously a lecturer at Napier university until 2009, when he founded the company to offer training and consultancy services in the area of data protection and e-commerce law. He remarked that most of his clients tend to be solicitors (as part of their continued professional development) and charities.

Tim also discussed his work as convenor of the Law Society of Scotland Privacy Law Reform Committee, whose current work includes formulating a response to the Regulation of Investigatory Powers (Scotland) Act.

Freedom of Information in Scotland for Data Journalists — Ally Tibbitt 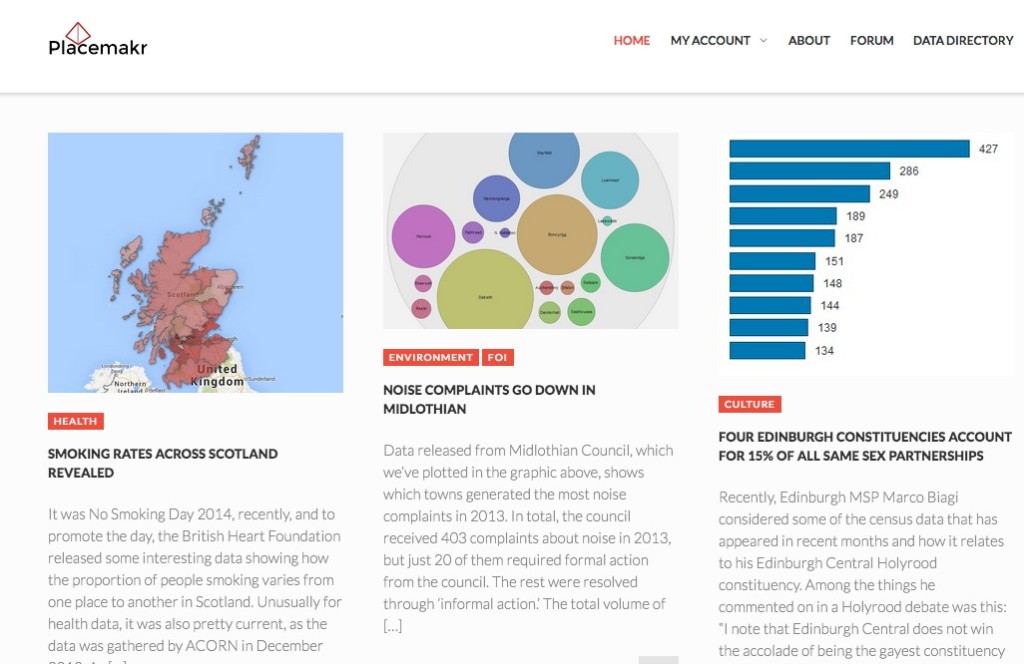 Ally Tibbitt, who works as a journalist for STV and runs Placemakr, discussed some of the issues he has encountered related to Freedom of Infomation requests in Scotland.

One of these problems is that people, be they journalists or members of the public, will frequently request data, use it for a story or campiagn, then forget about it. This means that the information and its usefulness is lost. The solution, says Ally, is to make the data more easily discoverable and searchable. His solution is to write short blog posts about the data, which is on of the main motivations behind Placemakr. These blog posts also serve the purpose of illustrating how a variety of data can be used in interesting ways.

Ally also talked about inconsistencies he has faced in requesting data from different public sector bodies. For example, he is currently involved in trying to map the location of all of Scotland’s CCTV cameras. But while some councils have been happy to provide information, others have refused it ‘on grounds of national security’.

Finally, Ally discussed his plans to develop an online course for data journalists in Scotland. Anyone interesting in getting involved in any of these projects can contact Ally at the Placemakr website.

Wilbert provided a useful introduction to linking data sets, taking us through some of the motivations for joining information sets together, and the kinds of problems encountered.

He illustrated this by discussing an analysis he had undertaken of the CETIS database of around 1000 technology R&D projects carried out by UK universities and colleges. Each entry in the database lists the institutions involved in the research, but only provides their names. But a lot more information would be available by linking up with existing datasets (e.g. from Jisc and Edubase about UK universities and colleges of further education. This in turn could be supplemented by data about the courses offered by those institutions, available from the Government’s Key Information Sets together with data from the EU LinkedUp project and information about the subjects of courses available via DBpedia. However, joining datasets in this is way is only possible if we have consistent and comprehensive data about universities and colleges to act as the core of the linking, and unfortunately, this is often lacking. For example, Edubase only covers institutional establishments in England and Wales. 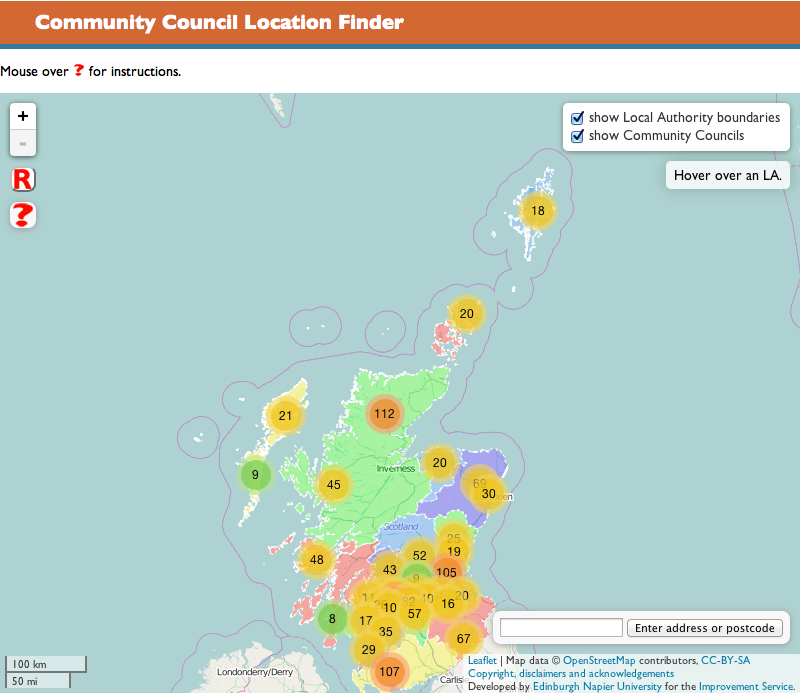 Bruce Ryan talked about the Community Council Location Finder, a short research project at the Institute for Informatics and Digital Innovation funded by the Improvement Service. The prototype is intended to map the location of community councils around Scotland. Bruce is a research associate at the Institute and gave a live demonstration of the current state of the project.

One of the biggest problems the project currently faces is finding accurate and up-to-date date. It is currently using data from 2012 that is beginning to go out of date. There are also questions as to whether it is appropriate to provide contact details of individual office-holders of the councils.

You can find out more about the Community Council Location Finder here.

What do MSPs talk about? — Daniel Duma

Last but not least, Daniel Duma presented What do MSPs talk about?, an application that monitors the topics discussed in speeches given by MSPs in the Scottish parliament. The project built during the 5 days of the recent Smart Data Hack, and allows constituents to see what topics their representatives are talking about on their behalf.

It works by taking transcript data from TheyWorkForYou.com to analyse the content of MSP speeches, but also compiles information from Scottish Neighborhood Statistics Index of Multiple Deprivation, allowing users to look for for patterns between issues in a local constituency and the topics being discussed by its MSP.

There is plenty of room to develop the project further, for example by distinguishing between activities that MSPs carry out directly in connection with their constituency (which might be expected to correlate more strongly with data from the Scottish Index of Multiple Deprivation), as opposed to activity carried out in their other official roles. So for example analysis of Kenny MacAskill MSP reveals a heavy focus on issues of crime and justice, which is not surprising given his role as Justice Secretary in the Scottish Government.

This meeting has also been covered by Iain Elder.