Ever the pioneer, our very own Glynn Staples helped organise the first Glasgow meet-up of the Open Knowledge Foundation (OKF) Local Group in Scotland. Although the OKF meetings have been taking place in Edinbugh for a while now, having regular meetings in the West of Scotland is a welcome development for many open data enthusiasts.

The meet-up was held in the Electron Club at the CCA on the evening of Tuesday 27th of August. Over 30 attendees were packed cosily (not squashed as such, but definitely sat close) into the room for six thoroughly interesting presentations.

Those who presented were:

After an introduction from Ewan Klein @ewanhklein / @okfnscot (OKF Ambassador for Scotland), Glynn started the evening off. 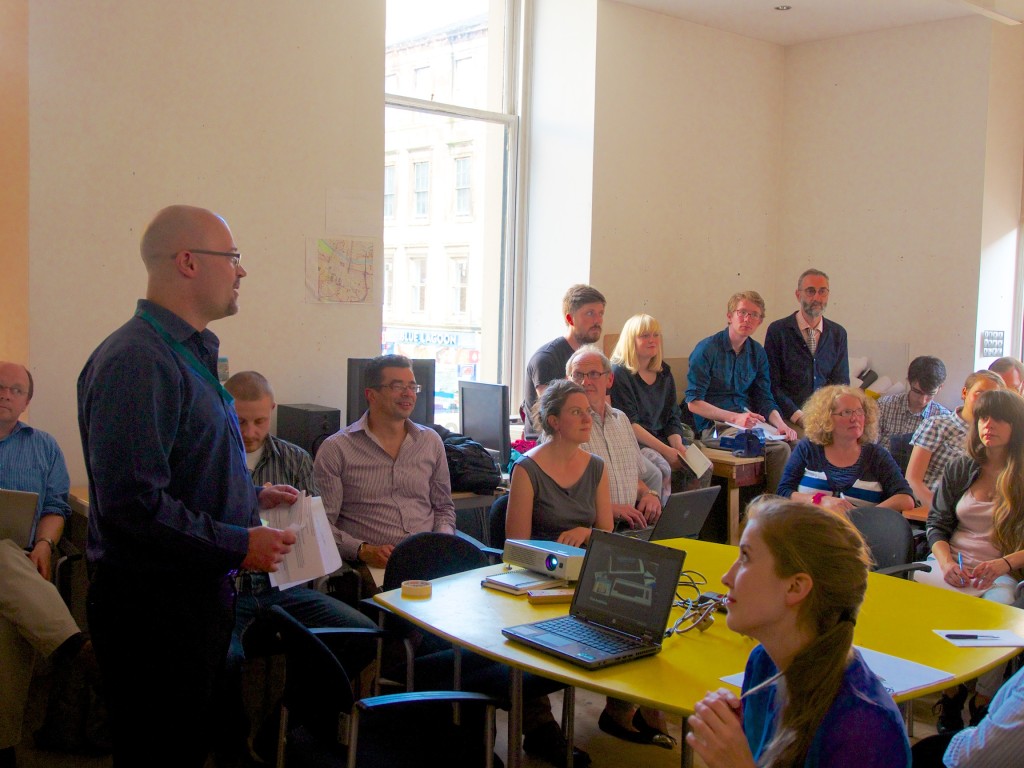 Glynn Staples at the Electron Club

Glasgow is the Technology Strategy Board’s Future Cities Demonstrator, and Future City | Glasgow is an exciting opportunity for opening up data, visualising that data and helping citizens take more control of their urban environment to sculpt the best experience in city-dwelling. The demonstrator themes are

The idea is that transparency and sharing open data can lead to smarter cities, and beyond this to future cities. Glynn gave the audience an overview introduction to the programme. His slides are available on Slideshare here. You can also read more from Glynn, in a blog post detailing his typical day as a ‘data gatherer’.

The second presentation was from Lizzie Brotherton, who told us about the lessons learned from #LJdatajam — the Learner Journey Data Jam. This was the first ever hackathon funded by the Scottish Government and took place earlier this year in Edinburgh, over a weekend in April. Part of the reason this event came about was from the White Paper ‘Putting Learners at the Centre’. The aim was to link a person’s previous education and history to enable the presentation of possible ‘next steps’ on for the learner’s journey through career and professional development. 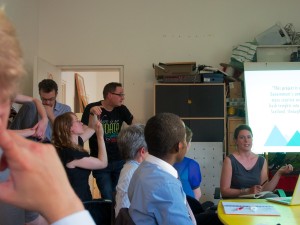 Lizzie described the event as fast-paced and collaborative. She wisely advised “you can’t put too much frame on a hack event, and that’s the beauty of it”. General parameters can be set, but the hackathon is organic in as much as what will come out of it cannot be set beforehand. These events are not about specific goals, but rather creating the right space in which solutions can be discovered and innovation can thrive.

An exciting outcome after the successes of the #LJdatajam event is that the Scottish Government are now doing more exploring of open data. This year has seen the creation of a new Scottish Government Data Management Board. It is clear that such a group will have a positive impact on the direction of technological entrepreneurship and open data in the future.

Next up, with the evening’s third presentation, was Graham Steel with an excellent to-the-point title ‘Publishing research without data is not science, it is advertising’.

Taking it further, here are some more quotes from his presentation.

Publishing articles without making the data available is scientific malpractice

Graham talked about how imperative it is making research data open so that people can access the findings of academic studies. This is of vital importance for solving problems as well as for the advancement of science. You can see Graham’s Prezi here.

Bill Roberts, the fourth presenter of the evening, is from Swirrl and is working with linked open data for the public sector. His presentation was insightful, explaining that people want to access data in different ways, with varying levels of technical complexity. For instance, a coder or a “hardcore SPARQL junkie” might want more technical complexity with SPARQL API, or JSON API but someone else may be seeking data in the form of CSV, Excel spreadsheets, maps, charts or simply published in webpages.

Neil Logan of Amor Group told us how he first got excited about data after looking into the data available for football matches. Such information tells us about the level of possession of the ball for each team, or even for specific players. It can go into detail of how many passes were made between particular players and even what foot was used to kick the ball. The level of football game analysis this data makes possible is interesting and full of potential for Neil. 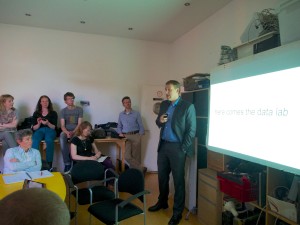 Neil now sits on the aforementioned Data Management Board. He has applied for funding from the Scottish Funding Council funding pot for the creation of Innovation Centres and is working with the set-up of a ‘Data Lab’, which would have three hubs across Scotland (in Glasgow, Edinburgh and Aberdeen). This would bring together academia with industry. The aim is to leverage all kinds of data, making it both more useful as well as profitable. He called for a “simplification in the innovation landscape”, with more Research & Development funding made available to advance the data science cause.

Read more about the theory behind the Data Lab in Neil’s blog.

Peter Winstanley made the evening’s sixth presentation. Peter, of the Scottish Government, told us about the UK Cabinet Office’s Open Standards Hub. There can be (a) de facto standards, or (b) de jure standards; meaning (a) that which is normal, or (b) that which follows set rules. Peter is keen that Open Standards Principles serve to create a level playing field. He presented what @LornaMCampbell described in her blog as “one of the most robust justifications for the adoption of open standards” and added that if she hadn’t been so precariously perched on the edge of a rather high table, a standing ovation and rapturous applause would have ensued. 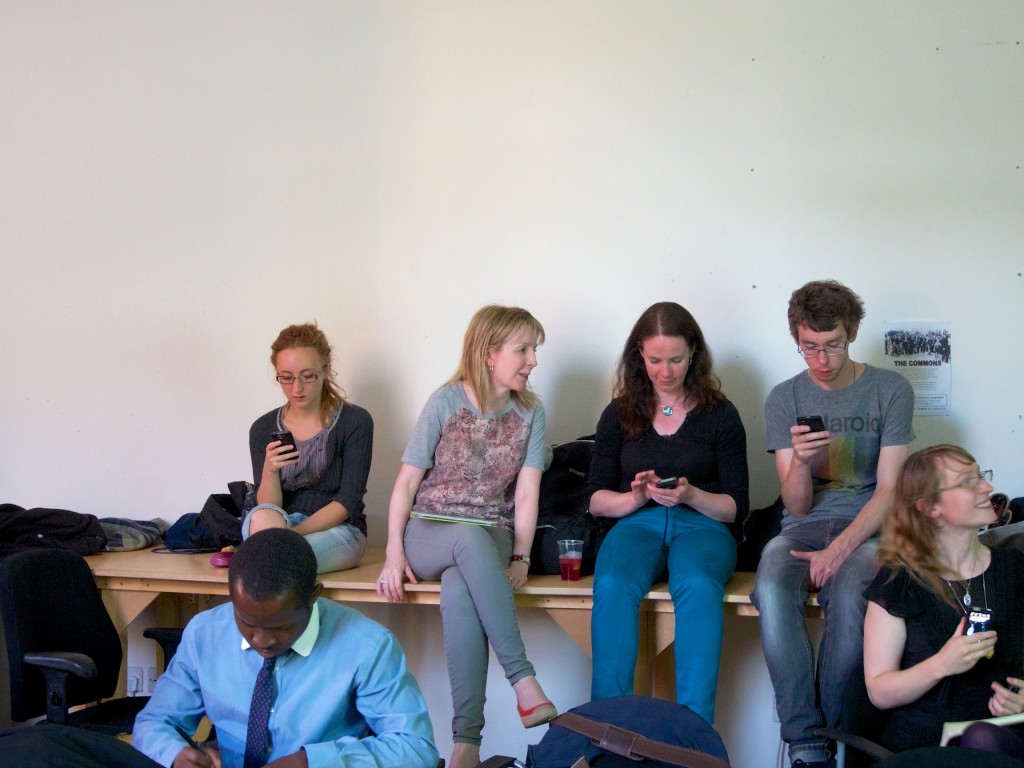 That said, all of the evening’s presenters were applauded. It seems clear that it was more than just the free drink (thanks to sponsorship from @SICSA_Scotland, the Scottish Informatics & Computer Science Alliance) during the half-way break that meant attendees at the first ever OKF Glasgow meet-up went away happy. The open data discussions were both inspiring and invigorating, leaving brains buzzing — plenty intoxication for a school-night!

Check the Twitter accounts @openglasgow and @okfnscot for further updates on the Glasgow OKF gatherings. Please use the hashtag #OpenDataGLA in any tweets about the OKFN Glasgow events, so we can keep the conversation going.