On 26th and 27th April the University of Edinburgh’s Old College hosted what appeared to be the first German-British Open Data event on Scottish ground — probably the first of its kind ever. A multidisciplinary group of scholars of the Foundation of German Business assembled to work themselves into the “Open Universe”. A group of speakers — from Edinburgh to Bath — shared their work on different aspects of openness. 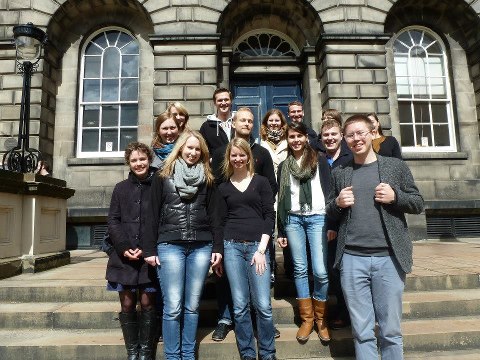 Under the title “Open Data — Better Society?”, a group of German students from all over the UK organised a weekend of talks on the “Open Universe” covering not only Open Data but overlapping disciplines like Open Science or Open Bibliography as well. What unites the students is them being scholarship holders of the “Stiftung der Deutschen Wirtschaft” (SDW), the Foundation of German Business. There are roughly 70 scholars in the UK and as the extracurricular seminars of their program in Germany are somehow out of geographical scope, they organise their own. As a final seminar of this academic year the scholars from Scotland and northern England shaped a program to discuss the field of Open Data from a societal rather than a technical perspective. As a student at the University of St Andrews I helped organise the event and would like to summarise the results and opinions that came up.

The seminar in Edinburgh came up with an innovation: usually our seminars are either closed or at least not promoted at all. This time we changed our policy and decided to make the event open. We spread the details using the ok-scotland mailing list and were very happy to welcome a number of additional guests ranging from students to professors.

Getting Started: The Open Data Essentials

I kicked off the seminar with an introductory talk about the Open Data essentials to orient students that had never came across the idea before. As I have more of a background in management and media science, I tried to connect the technical aspects of Open Data with thoughts on social implications, such as its use for global development strategies and the way the idea of Open Data is processed (or NOT processed) within the clutter of German public administration. With slides I borrowed from Julia Kloiber of the German Open Knowledge Foundation (OKF) Local Group,  I (hopefully) managed to introduce a group of Open Data newbies to the basic ideas. A lot of the content I used, including definitions and visualisations, came from the OKF homepage, which I hereby want to compliment for its accessibility for visitors without any technical or legal background. 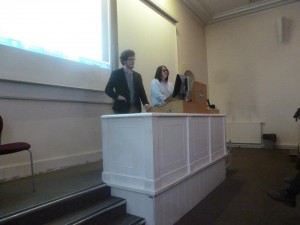 Ben Jeffrey & Connor Stuart from the University of Edinburgh

To stop my sermon on the theoretical pros and cons of opening things up, Ben Jeffrey and Connor Stuart, first year undergraduate students at the University of Edinburgh, pitched in to give us an insight of their project from the Smart Data Hack, which took place 18th–22nd February at the School of Informatics as part of the University’s Innovative Learning Week 2013. Their student group INF-YT aims to demonstrate the benefits of opening up datasets by mashing them up into student applications. As a major achievement they redesigned and integrated the University’s timetabling solution into what they call MyEd 2-“oh”, their proposal for a new student portal. Moreover they used 3rd party open data (e.g. bus info) to enhance the functionality of their student system and developed some more ideas on how to use the University’s datasets, which in general are not accessible under an open license. One provocative question from the audience was “How do you feel about building something in three days that the people responsible for it probably have been pondering about for months?”

How to capitalise on UK Open Data?

Ewan Klein, Professor at the School of Informatics at University of Edinburgh and Scottish Ambassador of the Open Knowledge Foundation, kicked off the second day of the event and gave a wide-ranging picture of how the spread of Open Data, starting from early proposals for civic engagement apps provided by MySociety, through the construction of the first Open Government Data portals in the US and UK 2009 and reaching to the setting up of the Open Data Institute (see below). His talk closed with a discussion of why Open Government Data achieved traction in 2009. Were there any pivotal technological breakthroughs? Did the idea reach a critical mass? 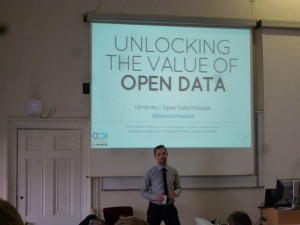 To catalyse an economically sustainable Open Data culture, the UK Government recently established the Open Data Institute in London. On Saturday morning Ulrich Atz, statistician at the ODI, came up from Shoreditch to present a blueprint on how to unlock the economic value of Open Data. Using the approach of the Business Model Canvas, he elaborated on the economic benefits of switching to making data open by default, and gave examples of Open Data driven business models used by startups such as MusicBrainz, Geolytix or Placr. His succinct slides are highly recommended. At this point our group wants to thank the ODI for their generous funding, which helped make this event happen.

Saturday afternoon widened the scope from Open Data to Open Science. Ross Mounce, PhD candidate at the University of Bath and former OKF Panton Fellow, started by providing a more detailed overview of the activities of OKF, with its many working groups and network of Local Groups in dozens of countries, and then moved on to discussing the economics behind academic journal publishing and reporting his frontline fight for Open Access to the scientific literature. 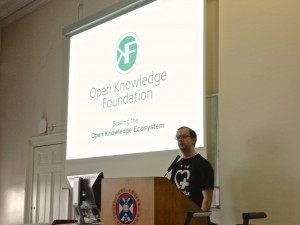 Ross Mounce from the University of Bath

Considering annual subscription rates of £40,000 for a single journal and a profit margin at around 40%, at least this branch of publishing business doesn’t seem to struggle that much. Ending with an emphatic plea to publish our academic papers in one of the numerous Open Access journals, Ross then handed over to Mark MacGillivray, PhD candidate at University of Edinburgh. Mark concluded the seminar with a journey into Open Bibliography — his effort to make bibliographic metadata available under an open license. Without this measure text-mining even the reference section of an article would be theoretically illegal.

The presentations were followed by lively discussions, which — at some point — all tackled security concerns arising from Open Data. Are there any imaginable scenarios for the abuse of Open Data? Can datasets be tampered with when circulated under an open license? Even if the datasets are anonymised — aren’t there possibilities for inferring the identity of the individual or at least of the household? During one of the breaks I had a brief discussion with Ewan Klein as to whether this concern with security and privacy is a German characteristic (after all, our Minister for Consumer Protection tends to threaten Facebook with the deletion of her profile if they do not stop passing user data along to 3rd parties) or inherent to European or even global Open Data initiatives. However, we didn’t manage to resolve this issue during the course of a coffee break.

Probably the most controversial discussion took place after Ross’ talk on Open Access and left the enduring impression that the SDW scholars were reluctant to accept the principle without certain restrictions. To counter the manifold advantages of Open Access, some participants mentioned the in-house quality control (in addition to the cost free peer-review) of prestige journals like Nature or Science. Other students referred to the financial compensation they had received for submitting their papers to some commercial journals, or to the reach of established papers within their special area, which they were not willing to sacrifice for the sake of openness.

I got the impression that the clash of technical pragmatism and a systemic approach within the audience resulted in new impulses on both sides and I would be glad to take part in future multidisciplinary events within the “Open Universe”.