The 23rd of February 2013 was International Open Data Day.  Since this fell at the end of the ILW Hack (blogged here) — a week-long event organised for students of Edinburgh’s School of Informatics, it seemed like a good opportunity to take advantage of the momentum and engage the stirring Edinburgh Open Data scene. 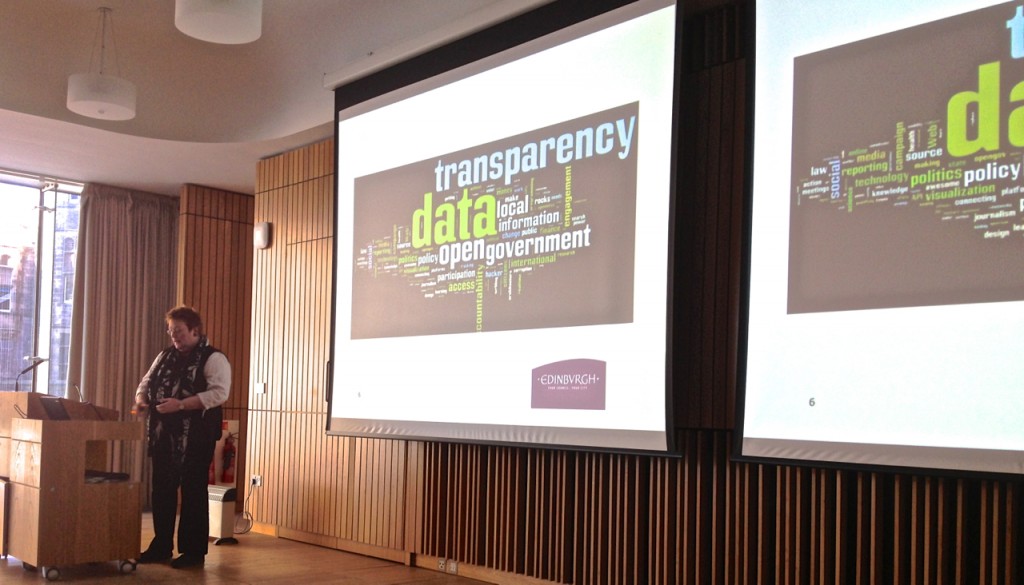 Many Open Data Days were organised around the world; most of them were hacks.  In Edinburgh we went for a different approach, thanks largely to input from local community activists like Freda O’Byrne, Leah Lockhart, Andy Hyde and Ally Tibbitt.  Some might call it ‘social hacking’.  Our aim was to bring together people with problems but little knowledge of Open Data, people with data that may or may not be open, and developers and technical types. You can read more about our goals on Joined Up Edinburgh.

With Open Data stuff exploding worldwide, and developers going nuts creating cool apps and services that make use of data being released, it’s important, you see, for {local, small-scale, voluntary, grassroots} groups and individuals to get involved early on.  Such parties are arguably likely to benefit the most from empowerment by data, and if they’re not part of the discussion early on we might well see a lot of services developed that only meet imaginary needs.

So on that note, we want to spread the word about Open Data to those who might normally be left behind.  When these groups know what the possibilities are (we can show them successful projects, both locally and worldwide), what is available, and what could and should be available, we empower them to take action that will benefit them. More specifically, people can find out that the Westminster government has released data about such-and-such-topic, and politely demand that the Scottish Parliament or local councils do the same.  They can interface early on with developers who are keen to start making, and make sure their real problems get solved (or at least prioritised over potential imaginary ones).  They can get involved with events like ILW Hack, and have a better idea of what it’s all about.

Between 10.00 am and 2.00 pm, we gathered around 35 people in the Informatics Forum and, fuelled by tea, coffee and biscuits, began the discussion. We started with an hour of ten-minute talks, covering a variety of topics:

Sally Kerr told us about Open Data at the City of Edinburgh Council; the progress they’ve made so far and where they hope to go in the future; and how Nesta’s Make It Local Scotland programme helped the Council to move forward with Open Data.  She pointed out that the decision to prepare and release new sets of open data as part the Council’s participation in ILW Hack projects had been a valuable step forward: it was an opportunity to focus on what Council data was readily available, and also to see how the students experimented with different applications of the data.

Alex Stobart of MyDex talked about big data, open data, and the challenges this is presenting to citizens and politicians in Scotland.

Iain Henderson explained the Standard Label; an easy-to-read specification for data holders to communicate what they will do with user data they collect.  Like nutritional advice, but for data. Other Open Data Day events across the world were centred around hacking with Standard Label as he spoke!

Bob Kerr talked about OpenStreetMap and illustrated some of the things that people had done with it in Edinburgh.  I love the obsessive hyperlocal detail lavished on some locations, like where different animals live in Edinburgh Zoo.  On a serious note, OpenStreetMap has really empowered local governments and NGOs in developing countries.

Andy Hyde discussed asset mapping for voluntary groups; how the ALISS project collates dispersed health and wellbeing information into a central, open repository, ripe for manual and programmatic access. He likened this to building a digital equivalent of the rich trove of information found on the notice boards of public libraries.

In the last of the talks, Lizzie Brotherston described the Post-16 Learner Journey Project. This aims to help learners make the transition from school into post-16 education or training, and is part of a Scottish Government initiative to better understand the learning landscape.  The project will be holding a Data Jam in April at TechCube.

Next it was unconference time! We had a short period of whole-room discussion, before identifying three key areas:

Everybody picked a group and we broke apart for the next couple of hours. The final part of the day was a return to the main room, and further room-wide discussion of the breakout debates.

The standardising visualisations group focussed on bringing people into conversations about data using a standard visual language.  Someone pointed out that if news readers used open data visualisations, the general public would be a lot more interested in open data.  It’s interesting to imagine a future where data visualisations are embedded into the world, into the landscape.  To be able to interact with data meaningfully, you’ve got to know what it is — to recognise it.  A standard — think periodic table — would help people to know exactly what you’re talking about straight away.  This goes beyond graphs and charts, into a world of layered visualisations that allow layered public contributions of interpretations.

Those interested in small scale voluntary organisations discussed data-holding and data-access issues, including strategies for persuading big organisations to open up their data (e.g., by showing success stories, and demonstrating a return on investment).  It was agreed that interfacing with developers is important to get things done that organisations really need; but organisations might not know what they need.  It was discovered that there’s a lot of crossover between groups represented by people who were in this discussion; common needs but gaps in talent.

Finally, with regards to sustainability of data projects it was agreed that strategies are needed for going beyond isolated hack events. In some cases, this might involve a core group of developers meeting on a regular basis in the run up to a hack. There is a corresponding need to record and evaluate the results and to investigate ways of keeping things going after the hack has finished. It is also important to get community groups engaged early on in the process, and to give them enough payback for their time that they stay involved. We also mentioned models of civic hacking that complement short hacks, like the year-long fellowships sponsored by Code for America and Apps4EU. Finally, it was also agreed that we need good mechanisms for keeping track of everything that’s going on, and linking communities with events — see OpenTechCalendar for a good start.

There was an enormous positive energy throughout the day.  Discussions were lively and passionate, and we had an excellent mix of people, exactly as hoped for. As we wrapped up, we collected everyone’s details for sharing and for helping to build on the momentum of the day. To keep in the loop, make sure you are on the Joined Up Edinburgh mailing list

Other people have blogged about this event too.  Check out these by Leah Lockhart and Dave Meikle (more links welcome).